After three and a half years Nurgle updated his dsktools package for Linux. With the dsktools you can read and write DSK images to a floppy drive (USB drives are unsupported!). The new version now supports double sided disks, so you can now transfer newer productions like R-Type under Linux, too. You can download the latest version of the dsktools from the Berlios project page.

Kevin Thacker released a new version of his 2cdt utility. With 2cdt, which is a command-line utility, it is possible to transfer files directly into a cdt tape image file.

The ZIP file contains the Windows version and the source code to compile it under Linux. You can download it here.

A new version of Grafx2, a bitmap painting program, was released today. With this program you can draw in more that 60 screen resolutions (e.g. all Amiga screen resolutions are supported). It was written for DOS, but ported to use the SDL graphics library, so it is now available for Windows, Linux, MacOS and FreeBSD. You can download it from the Grafx2 page at Google Code.

A new version of DSP, an emulator for various computer systems including the Amstrad CPC, is now, after a long time of development, available. You can download the new version from the DSP homepage.

• General
+ENHANCE: Started portability Lazarus + Free Pascal, now DSP can be compiled in Delphi, Lazarus under Windows and Lazarus under Linux (arcade drivers only ATM).
+BUG: Fixed a bug closing audio in Windows
+ENHANCE: Added a variable in the INI file to locate the language files
+ENHANCE: Create the INI file even if DSP don’t find language files
+BUG: Fixed a bug in the scroll, when the length of the screen was equal to the scroll window
+ENHANCE: Added sprite functions to use other sprites sizes than the original of the uncompressed graphics.
+ENHANCE: YM2151 – More speed (for example the opening scene of Jackal don’t slow down)
+BUG: Fixed some bugs when you select a portion of the tape directly from the panel.
+NEW: i8255 – Device i8255 (Mode 0 only)
+ENHANCE: M68000 – Added some more opcodes.
+ENHANCE: Fixed some bugs in the initial list of game load (initial preview, the initial list, default image, etc.)
• Spectrum
+ENHANCE: Implemented the special ULA+ colors function
+ENHANCE: Implemented screen with scanlines 2X and 3X.
+BUG: Fixed a bug in 0x19 block of TZX, don’t pause and games with protection Speedlock 1 does not work.
+ENHANCE: Implemented the initial state of the EAR with the symbols of the TZX 0x19 block, now load more games.
• Amstrad CPC
+NEW: Implemented i8255, more games load ( ‘Baby Jo Going Home’ saga ‘Barbarian’, etc), the color palette changes correctly.
+ENHANCE: Keyboard works much better (‘Antiriad’ works)
• Contra
+NEW: Added driver with stereo sound. Sprites problems, possible bug in the M6809 core
• Mappy
+NEW: Added driver without sound. Possible bugs in the M6809, graphical glitches.
• Rastan
+NEW: Added driver with sound (bugs in the M68000, so you can not pass the second stage).
• Legendary Wings Hardware
+NEW: Added Legendary Wings driver with sound
+NEW: Added Section Z driver with sound
+NEW: Added Trojan driver with sound, missing ADPCM sound
• Street Fighter
+NEW: Added driver with sound, missing ADPCM. When you start the driver, make some sound, and then stops all.
You can download the new binary (for windows and linux) and the source from here.

Lachlan Keown released a new version of his sprite editor for Windows. With AMSprite you can paint your graphics / sprites on a Windows PC and use them for your CPC productions, so it is perfect for cross-development. You can donwload it from the CPC Wiki article. 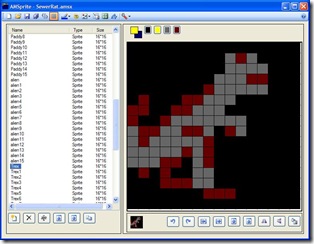