Morn released an english translation of the game Strego. Strego is a turn based strategy game by Matthias Fink, which was released in 1992 on the bonus disk of the german Amstrad CPC magazine CPC Schneider International. It can be played by two and up to four players.
You can download the DSK image and the manual from the [[Strego|CPC Wiki of Strego]]. 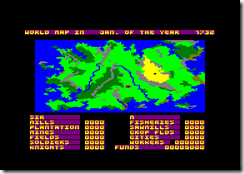