A new version of the SDCC C compiler is available. You can use SDCC to develop for the Amstrad CPC, e.g. with using the SDCC Code::Blocks template or the programming tutorials by Mochilote or with the CPCtelera framework that is used e.g. in the CPCRetroDev development competition. The new version contains also some features for the Z80 port, so be sure to update it. You can download it from http://sdcc.sourceforge.net.

A new version of CPCtelera, the Amstrad CPC game framework for C developers, was just released in version 1.4.2. CPCtelera offers a huge C library for the SDCC C cross-compiler, which makes it easier to create games and applications for the Amstrad CPC. This version mainly contains a new version of the SDCC compiler (v3.6.8), which is more efficient, creates better code and contains several bugfixes, but there are also some nice little features, which were added, too (see the ChangeLog for more details). It is available for Windows, Linux and OS-X. You can get the latest version from GitHub and discuss it in the CPCWiki forums. 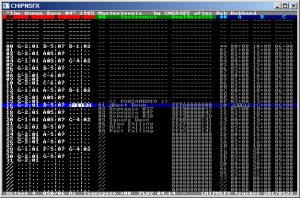 Chipnsfx is a music software suite with focus on a lightweight code and data written by CNGSoft. The player routine is under 950 bytes long and can be as small as 550 bytes. Like all newer software the softwore focus more than one system, so you can produce music for the Amstrad CPC, Sinclair Spectrum 128 and the MSX1. Other platforms can be supported by minor changes on the player routine (e.g. the Sega Master System). The tracker was already used in several CNGSoft productions like Bubble Bobble for CPC, Hire Hare, Frogalot, etc.

A new version of the Z88dk development environment for Z80 based computer (e.g. Amstrad CPC, Cambridge Z88, MSX, Sinclair ZX 81, Sinclair ZX Spectrum, etc.) was released. The release is a transition release on the way to v2.0 which aims on using both, the SDCC compiler and the Small-C compiler, to combine their advantages, which leads to much faster and smaller output binaries. You can choose between using the Small-C compiler with the old and the new C library or use the SDCC compiler with the new C library. The new C library also introduces full C standard compliance to Z88dk.
The newest version can be downloaded from the Z88dk homepage. The source code is available on GitHub.

END_OF_DOCUMENT_TOKEN_TO_BE_REPLACED

Roudoudou worked on a compressor / decompressor which uses the LZ48 / LZ49 compression algorithm on the Amstrad CPC and released his work in the CPCWiki forums. The compressor is inspired by the LZ4 compression algorithm of Yann Collet and the modifications fits well to the Z80 CPU of the Amstrad CPC. The advantage of this compression method is, that the decompression code is very small (83 bytes) and very fast. The disadvatage is that there are other compressors which feature a better compression ratio, but require more memory and more time for decompression as well.
You can get more information about the modified algorithm and download the assembly source from the CPCWiki forums. You can also find a version for SDCC / CPCtelera and binary files for Windows there.