Arkos released a new Beta version of their cross-plattform tracker “Arkos Tracker”. With the Arkos Tracker you can compose your chiptune music for the Amstrad CPC (and a variety of other computers), compile them and use the player for the specific system. The sound playback is done via emulation of the AY-3-891x soundchip on your PC or directly on an Amstrad CPC via the CPC Booster+.

You can download the new Beta version from the tools section of the Arkos homepage. 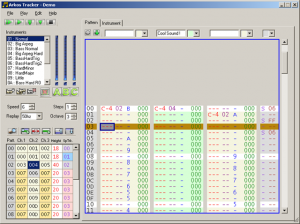