Warning: "continue" targeting switch is equivalent to "break". Did you mean to use "continue 2"? in /usr/www/users/octoat/octoate.de/wp-content/themes/suffusion/functions/media.php on line 666

Warning: "continue" targeting switch is equivalent to "break". Did you mean to use "continue 2"? in /usr/www/users/octoat/octoate.de/wp-content/themes/suffusion/functions/media.php on line 671

Warning: "continue" targeting switch is equivalent to "break". Did you mean to use "continue 2"? in /usr/www/users/octoat/octoate.de/wp-content/themes/suffusion/functions/media.php on line 684

Warning: "continue" targeting switch is equivalent to "break". Did you mean to use "continue 2"? in /usr/www/users/octoat/octoate.de/wp-content/themes/suffusion/functions/media.php on line 689

Warning: "continue" targeting switch is equivalent to "break". Did you mean to use "continue 2"? in /usr/www/users/octoat/octoate.de/wp-content/themes/suffusion/functions/media.php on line 694
 System | The Amstrad CPC news portal

And another Amstrad CPC production directly from the Revision 2018 in Saarbrücken / Germany: “Isometrikum” by Vanity. It competes in with the other entries in the 4k intro competition. Great to see so many new entry this year on the Revision. Here is the live video recording of it:

You can download the intro from Pouet.net (don’t forget to vote). 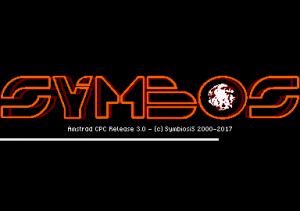 END_OF_DOCUMENT_TOKEN_TO_BE_REPLACED

Did you ever asked yourself how the Amstrad CPC was developed back in the 1980s? What was the intention of its design? Why did they change the main CPU from an MOS 6502 to a Zilog Z80 during the development? Why did they chose Locomotive BASIC instead of an other BASIC dialect? …
Nostalgia Nerd uploaded two great videos to Youtube where he had a closer look at Amstrad and the CPC development. Enjoy them! 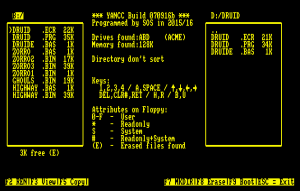 SOS released a very useful utility for all users of ACMEDOS called YANCC (Yet Another Norton Command Clone). With YANCC you can manage the files, which you have stored on your XMASS or Symbiface II IDE drives and of course you can easily copy them between your floppy disk. Obviously the GUI is similar to the old DOS program “Norton Commander”, hence the name of the utility. If you want to use it, be sure to compare the version number of ACMEDOS with the one that YANCC supports.
You can download the latest version of this utility from the CPCWiki forums.

Prodatron released a release candidate of his SymbOS system for the Amstrad CPC. After the network support, which was introduced in the last WIP version of SymbOS, the new version contains some bugfixes and support for widgets, which are little applications that can be placed directly inside the SymbOS desktop area. Like widgets for mobile phones they e.g. may show the time and date or the actual weather information. In the RC1, Prodatron currently provides a clock and CPU meter widget and a preview version of a weather widget.
The SymbOS ZIP archive also contains pre-installation files for the M4Board (Amstrad WiFi) and SYMBiFACE II compatible IDE interfaces now, so you can just copy them to the respective device and use SymbOS out of the box.

You can download and discuss the SymbOS 3.0 RC1 on the CPCWiki forums.