Miguel I. Garcia Lopez released a new version of his Unix-like shell for CP/M systems with Z80 CPU called SamaruX. Of course it features standard functionalities like redirecting the output of stdin / stdout, piping, environment variables, batch processing and much more. It was written with MESCC, a Small-C compiler for CP/M. If you are still using CP/M on your Amstrad CPC and want to test it, you can get the latest version of SamaruX, its source code and the MESCC compiler from the Floppy Software homepage. You can discuss about it in the CPCWiki forums. 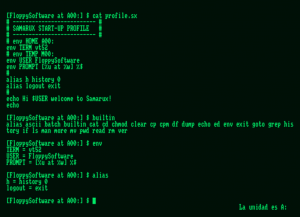