The Mojon Twins the first game in 2011 for the Amstrad CPC. The game starts where the first game finished: You leaved the Storm Palace and are now in Phantomas’ Electric garden (a setting of another Mojon Twins game). Strange enough you notice that your hard collected coins disappeared, so you have to collect them again – or will you just leave without collecting all coins? It’s your decision…
Uwol 2 is a successor of the game Uwol, which wasn’t released yet (but will be in the future) and is, like all other Mojon Twins games, a multi-platform game. You can also get the source code as usual :).

Download the game directly from the Mojon Twins homepage or at the end of this new posting. 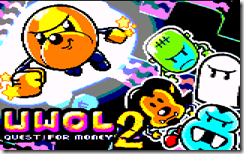