And another news game for the CPC brought to you by the Mojon Twins from spain. It has the strange name “Platformer Medley” which was originally just a development name, but the new name “A trip to the trippy supermarket, starring Mary Stormbringer” was too long and the development name already used ingame… Anyway… Platformer Medley is a jump and run game in the style of Jet Set Willy.
Btw, the Mojon Twins have already prepared a sequel which will only be released if you play through the whole game. If you finish it, you will get a keycode which you can send to the Mojon Twins and after that they will release the sequel. Nice motivation, isn’t it :-)?
You can download the game from the Mojon Twins homepage. 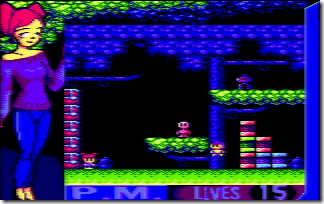 Jump and Run game in the style of Jet Set Willy.