The Mojon Twins released another game called “Lala Prologue”. In this game you play Lala, a trainee at the great witch academy, who caused a big mess while her teacher, Mistress Morgana la Marrana, was out to buy some potions at the supermarket. To make the long story short: you have to fetch all the filters and chemicals and you also have to fetch the keys to enter new areas in the game.
For more information on the game and its story, have a look at the game homepage. You will also find the DSK image, the CDT image and the source code of the game there. Be sure to download and play it.

The game was written with Z88dk and the cpcrslib, like Blue Angel 69, too. It uses the PSG player by Wyz for sound playback and Exomizer 2 as cross-development compressor. 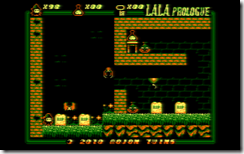 In this game you have to play a witch trainee and have to fetch all filters and chemicals. You will need to fetch the keys to reach other areas, too.