Ervin ported the game 3D-Maze written by Nigel Sharp in 1985 (Amstrad Computer User, October 1985) to a mixture of CCZ80 and assembler. He ported the BASIC game line by line and added additional assembler routines. Instead of using the slow drawing routines of the firmware, he uses some of the drawing routines which are available at the [[Programming#Graphics|CPCWiki]]. You can get more information about the port in the CCZ80 forums.

The DSK image contains both versions: the old BASIC version and the new, improved version. You can download the disk at the end of this posting and from the CPC Wiki. 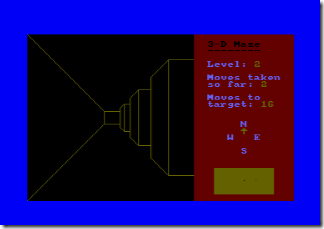 3D-Maze is a port of the old game which was published in the Amstrad Computer User magazine on October 1985 to CCZ80 and assembler. It was heavily speed up. This DSK image contains both versions. The old slow BASIC version and the new CCZ80 version.