Another new (old) game for the Amstrad CPC. Arquimedes XXI was the second try of Dinamic to write a text adventure. It was the first work of Jorge Blecua in this kind of game type and was released in 1986, but only for MSX and Spectrum – until now. Thanks to Devilmarkus, PulkoMandy, voXfReaX and MiguelSky we have now a working version for the CPC. It is available in french, spanish and english. Be sure to check it out and download it from Amstrad.es. 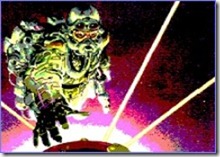