You already saw the news about the releases from the ReSeT #8 which took place in Coutances / France and was organised by Eliot. Now Voxfreax took the time to write a meeting report, which you can read on the Push’n’Pop homepage.

Hicks from Push’n’Pop interviewed the team of the Wake Up! demo, which was presented at the Revision 2012 demoparty in Saarbrücken / Germany. In the interview Eliot, Krusty, Voxfreax, Exin, McKlain and DMA-SC explain their intentions and effects used in the demo and also speak about their impressions of the Revision 2012 and the CPC demoscene.

Be sure to read the interview on Push’n’Pop.

Benediction released a new demo called “Wake Up” on the demo party “Revision” in Saarbrücken. It is a trakmo, which also features nice effects and great music, so be sure to download it from Pouet.net (don’t forget to vote for it) or at the end of this posting. 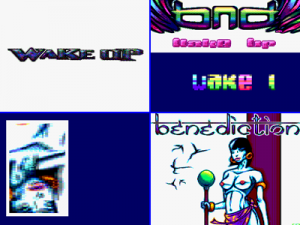 UPDATE: The demo was converted to Youtube, so you can view it without an emulator.

Wake Up demo by Benediction, released on the Revision 2012 demoparty in Saarbrücken / Germany.

Optimus of Dirty Minds released the final version of his Wolfenstrad demo (graphics by Voxfreax and music by Sice). It features a raycasting engine like in the good old id Software ego shooter. You can also move manually in the labyrinth. Wolfenstrad was developed in a mix of SDCC C code and Z80 assembly. Be sure to download it and vote for it on Pouet.net.

You can download it from its Pouet page and at the end of this news. 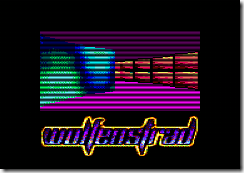 Wolfenstrad is a raycasting demo by Optimus of Dirty Minds (graphics by Voxfreakx, music by Sice).

Ok… I blogged you :-)! Ultrasyd, Krusty and Voxfrex released their new demo “Bloc us” on the Evoke 2011 demo party which was held in Cologne from 12th to 14th August. The demo was ranked on 9th place in the “Alternative Platform Compo”. It features great music, nice effects, is a trakmo… but watch it by yourself. You can download it from Pouet or at the end of this posting.

This is the live footage of the demo from the meeting:

Bloc us demo on the Evoke 2011 demo meeting

The "Bloc us" demo by Ultrasyd, Krusty and Voxfreax was released on the Evoke 2011 demoscene party and ranked 9th in the "Alternative Platform Compo". It features great music, nice effects and is a trakmo demo.