Do you remember BSCs AyAy Kaeppttn SID player for the CPC? He started to work on it again and improved it even more so that it supports three SID channels on the CPC now. When running his new SID engine, the CPC uses about 100% of the CPU, so there is nothing left for anything else. Well, since this is currently work in progress there is no official release, but you can listen to a conversion of the song “The Last Hero” by Future Freak of Dexion. You can join the technical discussion about the player in the CPC Wiki forums.

Norecess did some interviews during Xmas and put them on his website. This time, he interviewed BSC of Symbiosis (Soundtrakker, AYAY Kaeppttn), Made of Bomb (graphician for many CPC demos) and Thriller of Cadjo Clan (demomaker).

You can find the interviews here: 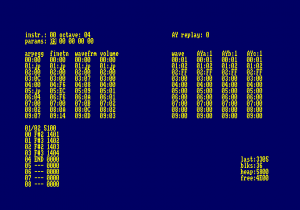