TFM released the first official version of the ROManager application for the MegaFlash from Bryce. After a long phase of testing by SyX the ROMananger in version 1.35 is now capable to perform the following tasks:

There are versions for Basic (either from disc or ROM redident) or for FutureOS. The Basic version can work with different drives and OSs. The ROM resident version needs  32 KB, which equals two ROMs. A version which only needs one ROM is under development.

The ROManager including all source codes can be downloaded at: http://www.FutureOS.de 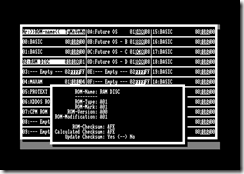